One Hundred Years of Solitude by Gabriel García Márquez
My rating: 5 of 5 stars

One Hundred Years of Solitude, by Nobel Laureate García Márquez was my January Classic Read. A sentinel novel of Latin American magical realism (the rains that last five years, the ghosts who haunt the Buendía family, the ascension of Remedios the Beauty while hanging the laundry!), I first read this book back in the 1980's. It's always interesting to reread books decades later and see how my thoughts about them have changed...

When I first read the book, I was impressed by characters and the somewhat Dickensian feel they had. Their quirky natures, and the way they remain plastic throughout their lives, continuing to change and grow. I was also taken aback by the frank incest in the novel, which wasn't something I'd seen a lot of in fiction. (Thirty years before GRRM gave us A Song of Ice and Fire, natch!) Now, however, I'm struck by how fundamentally unlikable many of male characters are, and view the entire Buendía family narrative as a metaphor for history repeating itself. The generations of all the José Acadios and Aurelianos are men possessed of intellect but not wisdom. In contrast, the strong Buendía women often suffer from the rampant sexism which still plagues Latin American culture (even expatriate culture here in the US) yet are also the foundation of the small community. This is exemplified in the cruel fate of Remedios Moscote, a child bride, and in the way so much of maintaining the fictional Macondo is left to Úrsula, who forges the connection to the outside world. The dysfunction of the world the Buendías built increases with each generation, ultimately culminating in Ursula's greatest fear, and a Macondo blown away... While some have viewed the novel as a metaphor for Latin American politics and history, I find it more generally a metaphor for the risks of insular living and not learning from history.

This a great novel that is not a facile read, especially because of the cutting back and forth in time, which can challenge a reader or listener, but also because of the generational names being repeated (four José Acadios, five main character Aurelianos, seventeen minor Aurelianos, an Aureliano José, plus three Remedios,* Amaranta, Úrsula, and Amaranta Úrsula). The book is made more accessible with a good family tree. Here's a fabulous graphical one, from nikhilkuria: 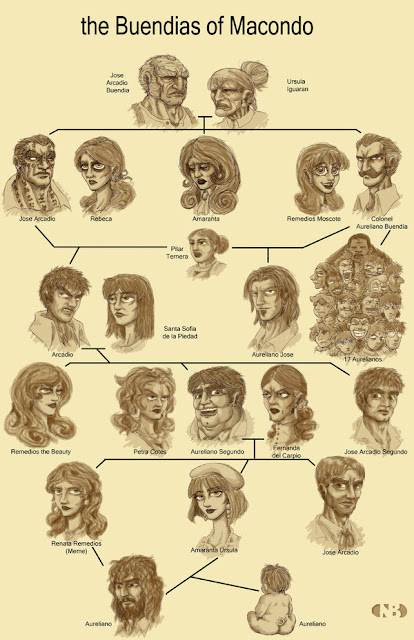 *Does anyone have an opinion about Remedios the Beauty and autism? She certainly seems like she was written as an autistic character I don't know how I didn't see that more clearly when I read it many years ago?