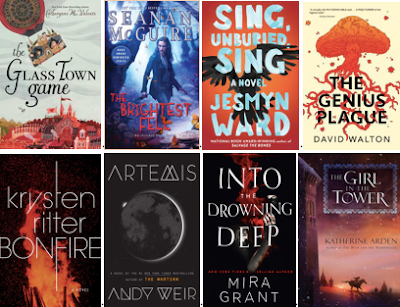 In the next couple of months, I'll be reviewing ARC copies of some pretty enticing books.

First up will be Lana Popovic's Wicked Like A Wildfire, which I hope to have up by no later than tomorrow because it releases tomorrow! (Worry about my kitty really killed the reading plans over the past couple of days...) Before the end of the month we'll have reviews for  Catherynne Valente's YA novel The Glasstown Game (releases September 5th, followed by National Book Award winning Jesmyn Ward's Sing, Unburied Sing, releasing the same date. And on September 5th, I'll finally get a chance to share my review of Seanan McGuire's The Brightest Fell, following the author's request to delay publishing reviews until release date. Boy, do I want to talk about The Brightest Fell... Some of it is going to stun longtime Toby Daye readers.

Looking onward toward October, I have internationally best-selling author David Walton's The Genius Plague (a reversal of the usually dire plague trope). But you'll be seeing a host of reviews in late October for all the November releases, including actress Krysten Ritter's (Marvel's Jessica Jones) debut novel Bonfire, Andy Weir's (author of the acclaimed international bestseller The Martian) new book Artemis, and Mira Grant's Into the Drowning Deep.

In between, I'll be doing my regular NetGalley and Edelweiss duty on a host of new authors, and filling in around the edges with a couple of more academic approaches to fairy and folktale forms (Baba Yaga, Seepling Beauty) plus there are those forthcoming releases that I couldn't get my greedy little hands on in ARC formats, like Nora K. Jemisin's The Stone Sky, which releases tomorrow!

The months ahead promise to be filled with interesting reads!
Email Post
Labels: forthcoming