Review: The Girl in the Tower

The Girl in the Tower by Katherine Arden
My rating: 5 of 5 stars

I was fortunate to receive an Advance Reader Copy of this book in exchange for an honest review.

When last we left Vasilisa Petrovna in The Bear and the Nightingale she had left Leznaya Semlya on her beloved Solovey, the magnificent and magical stallion son of the great horse of Morozko. As the story in The Girl in the Tower opens we find ourselves in Moscow, with Vasya's sister Olya, and eventually again meet her brother Sasha and even the shameful priest who had harmed Leznaya Semlya's delicate balance between the old ways and the new. It takes a deliciously long while for us to find out what happened with Vasya arriving at the home among the tree grove that is Morozko's.

There is no magic. Things are. Or they are not.

In many ways, The Girl in the Tower is a deeper and more complex story than The Bear and the Nightingale. The complexity is both due to the interweaving of more folklore (we see other famous 'monsters' from the pantheon) than just that of Morozko in this book, but also deeper because of questions about mortality, immortality, love, truth, and magic. The relationship between Vasya and Morozko deepens and we find that Death is surprisingly kind. Vasya must deal with further strife in terms of how everyone, at times even Morozko want her to be. But the two most important male figures in her life- Morozko and her brother Sasha, seem to find some way, some space, to allow Vasya to always be herself, even as they fear for her safety. Their fears are well justified. Torn between fates that would be anathema to her- two different towers with both implying differing horrors if you are Vasya, she is also caught between Death and Deathless, for a time.

There was a passage in the first book in which Solovey rebuts Vasya's saying he is not a bird with the comment "You do not know what you are; can you know what I am?" Although, yes, we can call Vasya a witch, I'm not sure, still, even at the end of this book, that we know exactly what Vasya is or what has been passed down to her from Tamara's mother to  Tamara, then Marina to Vasya and even Masha. We are left with strong suspicions, however. It will be interesting to see what Vasya can rebuild from what she has destroyed. And what little Masha will become.

This was a masterful second novel and an entirely satisfying middle book in the Winternight trilogy. I cannot wait to see what Katherine Arden has in store for us in the final book, "The Winter of the Witch."

And your mystery picture about this book is: 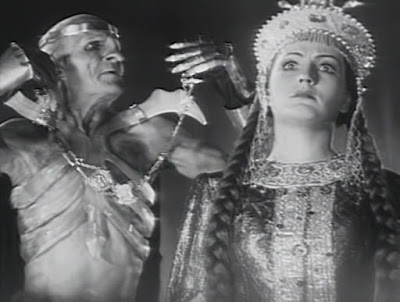