Review: Our Native Bees: North America’s Endangered Pollinators and the Fight to Save Them

Our Native Bees: North America’s Endangered Pollinators and the Fight to Save Them by Paige Embry
My rating: 5 of 5 stars

In the past decade we've also seen conflicting reasons given for the sudden disappearance or die-off of millions of honeybees that we need to pollinate our country's food crops. Actual causality (pesticides, viruses, parasites, cell phones, global warming) has been confusing, contradictory and has often been minimized. What has become clear is that honeybees cannot be the sole pollinator we rely on. Indeed, before the era of industrial farming, plants like apples, pears, blueberries and potatoes, relied on solitary bees and bumblebees as common pollinators. You've likely seen bumblebees but may wonder about solitary bees? Unlike eusocial honeybees (which produce honey and beeswax for their hives) and bumblebees which live in large hive colonies with well-organized jobs, solitary bees form solitary smaller communities. They are some of the bees you are used to seeing in your garden if you have pollen-producing plants. They are part of the class of native bees and a good guidebook on bees (I like the 2015 edition of The Bees in Your Backyard: A Guide to North America's Bees by Wilson and Carril) will help you start to learn to distinguish them. This book will help you sustain your native bee population and it's a wonderful resource for the bee lover.

Native bees, which include everything from mason or orchard bees to leafcutter bees (which have provided me with my most vivid childhood memories of gardening) to the bunchy and buzzy bumblebee, can provide vital relief for the stressed honeybee population. But only if we feed them, manage our gardens in a way that supports them, and provide them with the shelter they need. Am I telling you this book is all about how to have more bees in your garden? You bet! One of the best things about native bees is that unlike the honeybee population they are seldom if ever aggressive. They even include a class called stingless bees! These are bees that you want to promote in your garden but you definitely have to know how to do so. It's more than just planting bee balm, borage, and sunflowers!

This book describes how gardening and mechanized farming practices have changed over the past century, and where this has harmed or stressed the native bee population. This isn't just a story about large-scale farming being a bad thing. It can be as simple an issue as how you handle things in your own backyard. For instance, I have wild blueberry bushes growing at my home in New Hampshire. Every other year these bushes were getting pruned or even mowed to the ground, to foster the new growth required to produce new berries. However, it turns out that the older practice of burning back the bushes in small patches fostered better conditions for the wild bees that pollinate the blueberries. Pollen from genetically diverse blueberry plants is a requirement for production of fruit and we've been seeing less and less fruit in recent years in my yard. It turns out that many of the blueberry pollinators are tiny bees that have no internal temperature regulation. The blackened earth from burning back absorbs more radiant heat on cooler days and is helpful for the tiny blueberry bees. While bees like the scorched earth they won't travel far from, however. So burning a wide swath all at once removes what the bees need to survive in your blueberry patch- a nearby plant and some dark, warm earth. Our Native Bees is filled throughout with such details. It will help your fruit and vegetable production and help your bee population. I strongly recommend this book for anyone who gardens for vegetables, fruits or even flowers.

If you're looking for some added bee joy, be sure to check out the amazing work of artist Christine Farmer, who I've followed since 2011. 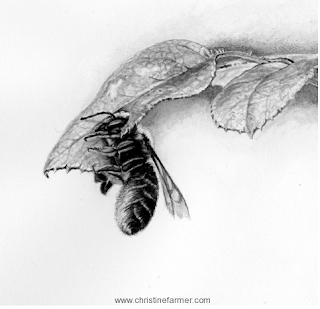 I received a Digital Review Copy of this book in exchange for an honest review, but I bought this book the minute it released.