Skip to main content
Labels
Posted by Marzie's Reads May 31, 2018

The Blue Sword by Robin McKinley
My rating: 5 of 5 stars

The Blue Sword was recommended to me by my friend Jennifer, who seemed shocked that I hadn't yet read it. She said firmly that I must read it. Jennifer is such a good influence. I should listen to her more, you know? Because The Blue Sword is a fabulous classic read.

Written in 1982, McKinley achieved Newbery Honors for this fantasy book (in theory, a children's book? Really? Find me the adult who wouldn't enjoy it.), which is set in the colonial era of British-styled empire called Daria and regions to the north. The primary peoples of this world are embodied in the genial if sluggish Homelander outpost of Istan, the independent Hillfolk of Damar (an autonomous border region), and the demon folk of the North. The protagonist, Harry (Angharad) Crewe, later called Hari or Harimad, is an orphan who is taken into the Istan household of Sir Charles and Lady Amelia as a courtesy to her sole surviving relative, her brother Dickie, an officer stationed in Istan. She adjusts to her new environment, a desert region, with equanimity. But she is not long for this new home. Kidnapped by a visiting Hillsman, Corlath, King of the Hillfolk, Harry begins a journey that reveals her magical heritage and her destiny to become a great warrior, wielding Gonturan, the titular Blue Sword of the legendary female warrior Aerin. Harry becomes vital to the defense of the Hillfolk and Homelanders when they are attacked by Thurra, the demon leader of the North.

While the story of a young woman coming into her power is the linchpin of many a Young Adult novel, what makes The Blue Sword stand out to me is the vivid and sophisticated backdrop, its political discussion, view of colonialism and an empire's lumbering bureaucracy, and views of autonomy and gender equality. So many wonderful themes in this book, along with its splendid character of Harry, the young woman between two worlds who finds a way to bridge them together. Given the original publication date, I wondered if this book and Harry were inspirational for Patty Briggs in her Sianim series. And in the demonic Northlanders, I can even see what might be a trace influence that yielded the white walkers in A Song of Ice and Fire.

The only possible criticism I can offer of this book is that the battle with Thurra was slightly anticlimactic to me since it was all over so quickly. I also wished that there had been more exposition about the Damarian people's magic, their kelar. (Perhaps there is in the subsequently published sequel The Hero and the Crown?) In spite of these issues, this is really a marvelous book that has held up well over time. Thirty-five years after it was published, this is still a very rewarding read. 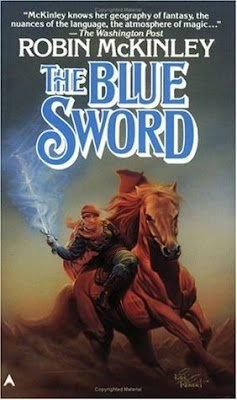 The original Ace cover for The Blue Sword


My Classic Read for June will be The Heart is a Lonely Hunter by Carson McCullers. For July I will be reading Anna Kavan's Ice. As you can see, I'm alternating literary and sci-fi/fantasy classics. I had thought of a book for August and now I can't remember! Yikes. Stay tuned!