The Tensorate Series: 3 Novellas by J.Y. Yang
My rating: 4 of 5 stars

Author Ken Liu has described the silkpunk genre as "a blend of science fiction, and fantasy... (that) draws inspiration from classical East Asian antiquity." JY Yang's Tensorate series is a silkpunk series set in a China on the cusp of technological developments like telegraphs, sophisticated munitions, and energy sources. This audiobook comprises the first three Tensorate novellas (a fourth novella will release in 2019). The story of twins, Akeha and Mokoya, is told in a very compressed fashion across the first two novellas, The Black Tides of Heaven and The Red Threads of Fortune . Akeha and Mokoya are children of the powerful Protector (insert irony here) in a world in which the magical underpinning of our reality, called Slack, shapes reality. The Protector and her children (greater in number than just Akeha and Monkoya) and various other adepts are Tensors, individuals who can manipulate the Slack. Slack and slackcraft are complex concepts, embodying aspects of Wu Xing (the five elements), aspects of Taoism, and of Sunyata, a term from Mahayana Buddhism. (Compare "Slack is all, and all is the Slack" to the famous quote from the Heart Sutra- "Form is emptiness, emptiness is form"). This philosophical fusion forms the backdrop for stories of love, loss, political upheaval, the balance between religion and power.

Initially pawns in their mother's plans, Akeha and Mokoya are raised together first in a monastery, then in the Court, then finally as young adults they break away from their mother and even each other, to follow their own paths. (To say their relationship with their mother is complicated is a serious understatement.) Akeha, whose story is told in The Black Tide of Heaven becomes a rebel against his mother's regime. Mokoya, whose story is told in The Red Threads of Fortune is initially valued as her mother's prophet, but then also rebels and marries the young head of the powerful monastery that opposes her mother's control over her people. While the stories in the novellas feature a very compressed timeline (in the first novella alone we see the twins born, bartered, raised and finding their path, following them to age thirty-five in 230 pages), Yang still manages to create imbue the story with their fascinating view of magic and rich philosophy. In particular The Red Threads of Fortune slows down the pace to show us the Mokoya's deeply felt feelings of loss that fuel her own rebellion against the Protectorate. We also see Mokoya coming to see that the threads of fortune can be shifted when we see things the right way and that we can change destiny.

One of the most fascinating aspects of these novellas is the gender construct. JY Yang, themselves non-binary, has created a world in which individuals are considered gender neutral until they self-declare a gender, and also one in which gender does not dictate orientation. While there is much religious conflict in this book, it's refreshing that absolutely none of it deals with gender or orientation. People get to be themselves, and the threads of the Slack are never bent to warp or change who a person really is in terms of their gender or orientation. (I just love this about this series.)

"The Black Tides of Heaven direct the courses of human lives. But as with all waters, one can swim against the tide... I chose to swim. So can you."

In the third novella, The Descent of Monsters however, we are introduced to a new twin, Rider, who we first encountered in The Red Threads of Fortune. They are searching for their separated twin, and that search occupies most of the book and is not fully resolved, presumably leading to the fourth novella. This is the first of the novellas in which see the Slack used to distort people and their potential, animals and their nature, and what can truly be a perversion of the natural order, all in service of holding on to power. The monsters of the title are less those 'created' than the creators themselves, who enslave, experiment, and abuse nature and the Slack.

This is a really marvelous series in which Yang trusts that you will gain understanding via submersion into the Tensorate world. It's worth your patience. The audio edition may assist some readers puzzling about the pronunciation of many of the terms.

P.S. This series has also given me my new favorite, discreet, all-purpose swear word- cheebye. Like Mokoya, at times I, too, wish I could curse myself into serenity. 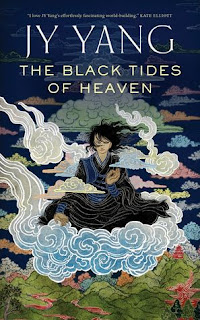 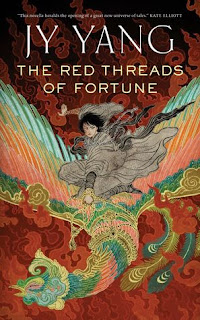 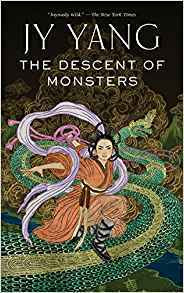 I received an ARC copy of Descent of Monsters prior to listening to the recently released audiobook edition of the three novellas.
Email Post
Labels: Chinese mythology fantasy JY Yang LGBTQ friendly silkpunk