Review: In the Night Wood

In the Night Wood by Dale Bailey
My rating: 3.5 of 5 stars

In the Night Wood is a short novel that is nevertheless not an easy read. A dark fantasy, it features an antihero who is an adulterous, failed parent and struggling scholar, and whose wife is a descendent of Caedmon Hollow, English author of the titular story, "In the Night Wood." At a fortuitous moment, American Charles Hayden and his grief-stricken wife Erin find themselves the beneficiaries of her recently deceased Hollow ancestor, who bestowed Hollow House, its lands and its fortune upon Erin, his last living descendant upon his death. Seeking to escape the death of his child and near wreck of his marriage, Charles, who first read Hollow's "Into the Night Wood" as a child of eight or nine years of age, moves to England with Erin, to research the life and work of Caedmon Hollow while living in Hollow House, situated near a village called Yarrow. Hayden is haunted by the death of his young daughter, for which he blames himself, and for his ruinous affair with a colleague, the sultrily named Syrah. Erin meanwhile loses herself in a haze of prescription drugs and seeming hallucinations, seeing their dead daughter Lissa in every girl of similar age that she encounters. She spends her hours drawing her daughter again and again, until a new obsession overtakes her art (spoilers). Over the course of a few days, Charles meets the police inspector, along with a handful of other Yarrow locals like the pub owner, the hardware store owner, and most importantly, the Hollow estate's steward, Cillian Harris. Charles pursues his research, encountering Silva, who manages the Yarrow village's historical society and whose daughter, Lorna, is a ringer for Lissa. Meanwhile, just before the Haydens move to Hollow House, a little girl named Mary, who also looks like Lissa and Lorna, has gone missing. Together, Charles and Silva find evidence of dark doings in Caedmon Hollow's past and the strange links between the Hollow family and the stewards of the estate. Along the way, Charles receives many warnings about Eorl Wood, the forest that encloses Hollow House. As Erin descends further into her depression over her daughter's death and fractured marriage, Charles sinks deeper into his own guilt and despair, eventually walking into the forest and finding greater darkness.


The past is never dead. It isn't even past. ~ William Faulkner, Requiem for a Nun

The dark heart of this story lies in "In the Night Wood," in which the long-dead character of Caedmon Hollow wrote a story that seems (we get excerpts of the story but never the whole story) to be a merging of the faery ride of Tam Lin and the legend of Herne the Hunter of Windsor Forest. A child named Laura becomes lost in the wood and tries to escape the an evil Horned Man. We're told the story is not a children's story since it's implied that Laura does not escape the Horned Man. Her fate isn't clearly spelled out until Charles and Silva begin to unravel the fate of a long ago murdered child, Livia. There are plenty of literary allusions in the story, to the fae and Goblin Market, Tam Lin and other tales of folklore, along with occasional pithy quotes like Faulkner's famous quote about the past. The story of Herne or Horne first appears in written folklore of the British Isles in a reference in Shakespeare's The Merry Wives of Windsor. The folklore figure reemerges in the 1792 in the writing of Samuel Ireland and then again in the 1840's. Herne or Horne has sometimes been linked to Cernunnos, a Gaulish folklore deity but most of the stories of Herne, the horned man, are centered in the Berkshire region of England. The Berkshire Herne is most commonly held to merely be a poacher. In Caedmon Hollow's story, however, the Horned Man is a figure who periodically requires a tithe or tiend to remain youthful and strong, hence the allusion to Tam Lin and the faery ride. Like a Green Man of folklore, he is leaf-covered but he is not peaceful entity. 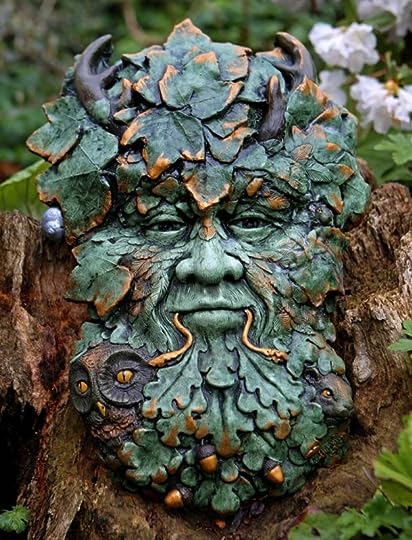 This is a dark and compelling fantasy but I felt it could have been developed further into a stronger novel. I wanted to understand Erin and the marriage better, and get a stronger sense of the cultural displacement that the Haydens would have faced transitioning from life in Ransom, North Carolina to that of a small English village like Yarrow. (Readers who go looking for a real English village of the name will only find a Yarrow in the Scottish Borderlands region.) We see how word travels quickly in the small community about the Hayden's dead daughter but we don't see any real struggles on their part with adapting to their new home. There is never a question on Charles' part about whether they have traded one nosy or judgmental community for another, for instance. While Bailey developed the dreamlike feel of the Eorl Woods and Hollow House beautifully, I just didn't buy the idea of Charles adapting so rapidly to his new environs and society. I also wanted to know more about Cillian, Mrs. Ramsden, Silva and even Ann Merrow, an attorney who seems to have questioned little up to the point the novel gets going.

This is an interesting read but not one for those looking for a happy fantasy tale.

I received a Digital Review Copy of this book from Houghton Mifflin Harcourt via Edelweiss, along with a paper review copy, in exchange for an honest review.