Review: The Call of the Wild

The Call of the Wild by Jack London
My rating: 4 of 5 stars

Call of the Wild was my Classic Read for the blog for December 2018. I just want to say up front that while the book is beautifully written, I hated the brutality of it with a passion and am going to have at the person who told me I "had to read it!" the first time I get close to them.

The story of a St. Bernard-Scotch Collie mix dog named Buck, The Call of the Wild is notable as an early work of anthromorphic fiction. It to some extent falls within the genre of naturalism, because it depicts the effect of environment and social status on the characters in the story. There are also elements of survivalism, pastoralism and primitivism, in which the protagonist in an untamed wilderness slowly goes native, or in this case, wolf. From panhandling outdoorsmen to middle class Gold Rush stampeders, we see the contrast of those who have learned to survive in the Klondike and the fools who ignore every shred of sense or assistance. The opposition of civilization versus the wild is at the heart of this book.

Buck is a large and powerful dog living a comfortable life when he is abruptly dognapped and sold to relieve his kidnapper's debts. He is brutalized but never quite broken by a series of truly awful human beings (at a minimum you want them all to endure the same treatment they give Buck) as he becomes a Northern beast of burden- a sled dog. Fighting for his survival against other sled pack dogs, against brutal humans, and finally against wolves, Buck answers the call of the wild and joins a wolf pack as its leader by the book's end.

Buck, an outsider by virtue of his size, history and intelligence, must fight over the course of the book for every scrap of freedom, power and dignity he holds, even when he finally joins a wolf pack as its leader. London, who was himself an outsider, wrote this adventure novella from Buck's point of view, endowing him with reasoning and language similar to that of a person. The anthropomorphism, which one can argue was not previously seen (the book published in 1903) to this extent in adult literature, earned London a fair amount of criticism when the book was first published. (Nowadays we would probably laud London as an animal rights activist and social justice warrior.)

Buck's solely positive relationship with a human is that with John Thornton, the only person in this story who treats Buck with the love and kindness any companion animal deserves. Thornton, who saves Buck from an icy fate, refuses to part with Buck and comprehends the dog's devotion and loyalty to him. Buck, in turn, refuses to answer the call of the wild until Thornton's passing and after his avenging Thornton's death. Their loyalty and love for one another comprise the only thing that makes this book bearable for me to read. With the exception of Thornton, every other human in this story is just horrible. Some of the other dogs are horrible, too.

You can see a photograph of the real-life dog Buck, who inspired Jack London's story in the collection of Yale University's Beinecke Library here. You may be able to enlarge this image to see this huge and splendid dog: 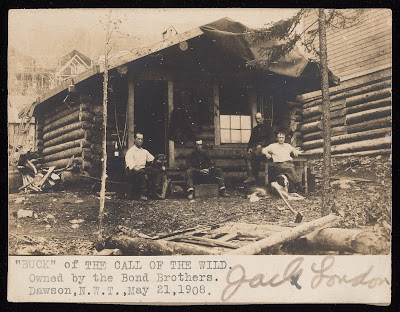 While I can see much to commend in the actual writing, the brutality of this tale is hard on this reader.