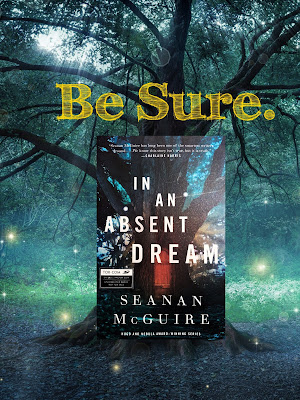 In an Absent Dream is the latest in the Wayward Children series. It released Tuesday, January 8th. This is the story of Katherine Lundy, who we first met in Every Heart a Doorway, as a teacher and counselor in Eleanor West's School for Wayward Children. Lundy's life wasn't a happy one. And here we find out all about her wayward background.

You can find my review of In an Absent Dream here. The title, drawn from Christina Rossetti's poem Goblin Market, is your clue that Lundy's world was a goblin market one. The interesting thing about Lundy's world is that this is finally a hereditary door! The goblin market is a portal world that Lundy find her father also visited. But her love of this world and some of the people in it is certainly not matched by her father.

In Part 1 of our discusion, which is over on Alex's blog, we contemplate Lundy and Moon's friendship and the structure of the market. In Part 2 we look at hereditary doors and their emotional perils for those who come back to our world.

Marzie: I've been thinking a lot about Lundy's father and what his experience must have been like that he left and never went back. (He was sure about leaving!) It was interesting that this was finally a hereditary door, wasn't it?

Alex: I was so excited to see one of the hereditary doors! I had been dying to find out what that was like.

Marzie: Yes, and that it passed to Diana’s son was interesting.

Janelle: I am so excited to see more about the hereditary element in future works. I’m hoping it’ll be a doozy.

Alex: I was frustrated at her father for behaving the way he did. He could have chosen to make his world more attractive instead of restrictive. He threw acid on it instead. He drove her away.

Marzie: I thought her father was very misguided. I’m not even sure it would have taken much to make Katherine’s world richer than Lundy’s. Just even the shared experience, if he had really talked to her, might have been enough to ground her here. But his negative reactions and the reality of their family and school made it all the opposite. The Goblin Market was really far more appealing because she could be herself and freed from the constraints of the principal’s daughter role.

Alex: He probably felt like he won for the first few years too. Smug and sure that he’d convinced her to choose his reality instead of what she really wanted. I want to see the look of horror on his face when he realized what had actually played out.

Janelle: This story was so deliciously tragic. In almost every way. I love tragedies, and this one is spectacular.

Marzie: It is. I really cried at the end. I haven’t done that since Down Among the Sticks and Bones when Alexis was murdered.

Alex: It really was a tragedy. And I think that’s part of why I love it so much. I identified more with Lundy than I have with any other Wayward child so far.

Janelle: I identified with Lundy as well, although I thiiiiink when all is said and done, I’ll end up feeling most kinship with Eleanor herself.

Alex: Nonsense! ;) The Goblin Market was decidedly Logical, and yet still had a sense of whimsy about it that I loved. There are rules to be followed and wiggle room for the young.

Marzie: LOL. High Logic and High Wicked…(that’s what they say in EHAD) There was whimsy. And I’ll never forget Moon, the bird girl. It was what pushed this book to 5 stars for me. The idea of what her learned life was there… the role with the Archivist, who is so abstruse and odd, just… haunting, that girl. I literally could not stop thinking about Moon.

Janelle: I loved Moon so much.

Alex: Moon broke my heart at the start, and filled it in the middle when she got her apprenticeship and then broke it again when she last spoke with Lundy. That last quote really got me in the feels. “You were my best friend ever. Remember that okay? I loved you a lot. Even if you did build a boat big enough to bury yourself in.”

Marzie: Seriously, I cried for both Lundy and Moon. Fantasy books hardly ever make me cry.

Janelle: Yes, it did me, as well. I didn’t cry, I don’t cry very much, but I did think about the story a lot, and the tragedy did affect me. It stuck with me.

Alex: I cried. Not when I first read the line, because I didn’t know what she meant yet, but once it was clear, I cried, because Moon tried to save her, but Lundy didn’t let her, and she asked, so Moon, bound by the rules of the Market, had to answer.

Marzie: I guess since we know from EHAD that the Goblin Market booted her out, I could see that Moon was having to leave her to her own sad fate. I did feel like the Archivist tried to warn her, but mostly it felt like they wanted to keep her (the Market, I mean). It was all just going to be bad, the way things turned out.

Alex: I had kind of forgotten, and hoped and hoped that Lundy would find a way to stay. Oh gosh, Lundy broke the Archivist’s heart as much as she broke Moon’s.

Marzie: She did. I think everyone’s heart was broken, probably even Diana’s. At some point before Eleanor arrived, she must have begun to realize a bit of what she had cost Katherine.

Marzie: Yes, I think it is even sadder than Jack’s because at least Jack goes home and gets to rebuild her life on the Moors. Lundy doesn’t get that resolution. She gets murdered.

Alex: Yeah, Jack has a chance to go home. And Jill deserves the bed she’s made for herself. Lundy just wanted to be a sister and to have the Market.

Marzie: Part of me wishes that Diana could have joined her in the Goblin Market. That would have been the only chance for her to be happy- to have Diana and Moon together. But clearly not a possible solution. I wonder what she thinks of her nephew going (before she leaves for Eleanor’s school, I mean). That must have been searing… to realize he gets to go back to a place she loved and is barred from returning to.

Janelle: God, yeah. That was the last straw. I felt just so much empathy for her in that moment. She didn’t even do anything wrong. It was just an impossible situation, and it broke her. Everything else stemmed from that.

Alex: It was probably salt in the wound, and finally the last thing that made Lundy need to finally leave and go to the school.

Marzie: Yes. I can’t imagine sitting there for a decade watching my nephew go to a world I loved, with people in it I love, knowing I’ll never go back. *sobs*

Janelle: Totally. It makes me want to read (or write!) more tragedies, because they really just do it for me.

Alex: That would have been the last of it for me, certainly. In An Absent Dream is the best of the series so far, in my opinion and I can’t WAIT for more people to read it.

Marzie: So all in all we love this book. It’s one of the strongest in the series. For me, DATSAB is still my favorite but I love the way she made me care about Lundy in this book because she wasn’t a character I was particularly drawn to in EHAD.

Janelle: Yes. I think it’s my favorite entry, but I also really like Down Among the Sticks and Bones. Is Come Tumbling Down out yet? Haha.

Alex: I WISH! Hey Tor.com, when will we get that publication date? I need to know how many more days of heartache I have left!

Janelle: Hopefully 2019 will be another short year for me.

Alex: Janelle, thanks so much for reading along with us again! Same bat time, same bat place when Come Tumbling Down releases?

Marzie: We are going to have to find more stuff to read and discuss until then!

Alex, Janelle and I have been have a wonderful time discussing the Wayward Children books and can hardly believe that we'll likely have to wait a whole year before we discuss the next in the series, Come Tumbling Down. Thanks for joining us and see you again soon for other books!
Email Post
Labels: Buddy Read portal fantasy Seanan McGuire Wayward Children