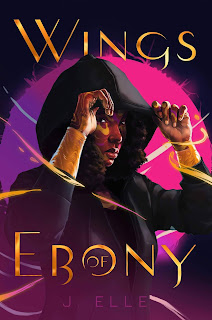 Wings of Ebony is a fierce debut novel by J. Elle, a teacher and advocate for marginalized voices. First in a series, it follows Rue, a teen whose mother is murdered at the start of the novel and who has been whisked away from the home and sister she loves by a father she never knew, to live in a secret, magical kingdom called Ghazan. Rue is shocked to find that her father has magical abilities and that she must remain in Ghazan permanently in order to preserve its secrets. But, when her sister Tasha, who is living back in the East Row district of Houston, is threatened, Rue will move heaven and earth to save her. Her father Aasim is an inscrutable aide. But once back in Houston, Rue begins to realize that forces from Ghazan are influencing the troubles in East Row. And some people seem to think she is the key to overcoming the problems in East Row and problems a lot of Ghazanis aren't even aware of.Had you ever wondered what would have happened if white colonizers had discovered Wakanda and its people? Elle clearly has. With unapologetic takes on racism, colonialism, reparations, and say their name, J. Elle gives us a compassionate but oh, so firm, heroine who stands as a role model for black young adults. Rue's friendship with the white (well, okay, gray) Bri is a marvel as a work in anti-racism progress. After this poignant start, I cannot wait to see where J. Elle takes Rue, Tasha, Bri, and Jhamal.I loved this YA novel. I want to give it to every young black person I know, but even moreso I want to give it to every WHITE young person I know, to get them to think deeply about these issues.The audiobook is narrated by the fabulous Bahni Turpin (The Hate U Give, Transcendental Kingdom, Children of Blood and Bone.)I received an advance review copy of this novel from the publisher in exchange for an honest review.