Review: City of the Plague God 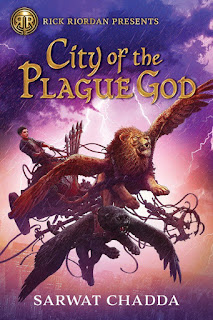 City of the Plague God by Sarwat Chadda
My rating: 5 of 5 stars

The latest entry in the Rick Riordan Presents series, Sarwat Chadda's City of the Plague God introduces us to Sikander Aziz, younger son of Iraqi refugee parents, and his kind-of-friend Belet, adopted daughter of the goddess Ishtar. Sikander, whose parents run a popular Arabic/Mediterranean deli, misses his older brother Mo, who recently passed away. Sik is only thirteen but is a very responsible young man, who helps his parents run their business in lower Manhattan. Imagine his shock when the Mesopotamian god Nergal shows up with some demons (one of which speaks entirely in rhyming couplets) claiming that Sik has something that his brother Mo stole! Saved by the feisty Belet, the adopted daughter of Ishtar, goddess of love and war, Sik embarks, rather unwillingly, on an adventure to save Manhattan, his parents, and his friends, from Nergal the Plague God, whose plague dogs run rampant in the city Sik loves.Chadda has written a well-paced and truly fascinating tale using Gilgamesh and the gods and goddesses of Mesopotamian mythology. He also manages to reframe aspects of Arabic and Islamic culture in ways that are instructive for teaching tolerance and understanding. (In particular, I loved his use of common Islamic terms that are all too often misused or misconstrued, such as jihad, a righteous struggle that is often personal.) Chadda touches on the prejudice and bullying that Sik has had to put up with, though Sik is rather inured to it at this point. But this story makes young readers identify strongly with Sikander, his love of family, and his feelings of loss for his brother. Belet is also a fabulous, fearless character. I hope that we will see more novels from Chadda in this world. This novel, begun before the start of the pandemic, encourages young people to be strong in the face of our present adversity.The audiobook, narrated by Vikas Adam, was delightful.I received an advance review copy of this novel in exchange for an honest review.