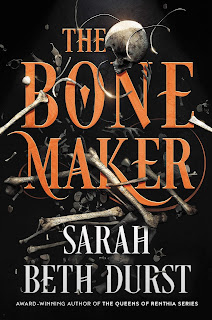 The Bone Maker by Sarah Beth Durst
My rating: 4 of 5 stars

The Bone Maker is another enjoyable Sarah Beth Durst standalone, set in a magical world where bones can be used in the practice of magic, both for good and evil. Kreya is an aging bone maker, who creates magical bone objects that can animate devices and... dead people. When we meet her she is seeking the bones of a recently dead child in order to reanimate her dead husband Jentt. She has been doing this for more than twenty years, unable to accept his death. In order to escape detection, she has been using powerful talismans for strength and stealth, that allow her to sneak into burials and steal portions of corpses before they are burned to ash. In her most recent attempt, she is almost caught and obtains so small a fragment of bone that her husband is reanimated as a revenant for less than a day. Kreya decides to return to the city in which her reputation was forged to ask her friend Zera, a renowned talisman maker, for more talismans. Zera however, is angry because twenty years before, at the end of the Bone War against an evil bone maker named Eklor, Kreya abandoned her and all her companions, when Jentt died defending Zera. In the decades since, Zera has become wealthy and famous for her work. Kreya, however, is now virtually unknown. The two women initially squabble and Zera refuses to help her. After Kreya leaves, Zera has a chance of heart, remembering their friendship, and goes after her, only to be horrified when she finds out what Kreya has been doing for the past couple of decades with Jentt's corpse. In the end, however, Zera agrees to Kreya's crazy plan of going to a forbidden zone where the Bone War took place, to recover sufficient bone material to permanently restore Jentt, because together the two of them plan to burn the remaining bones as a burial ceremony for the dead lost to the Bone War. When they arrive, they are shocked to find that Eklor lives and has his own plans for the bones- he is rebuilding his army. Kreya and Zera must regroup with those who fought in the original war to finally defeat him.The world-building in this novel is, as usual for Durst, absolutely stunning in its richness and creative thinking. And the two main characters of this novel, Kreya and Zera, are no less remarkable. How often do we see fantasy novels featuring not one but two aging female protagonists? I just can't say enough about how much I love Durst's female characters. They are unique, beautiful, and real women, with strengths and flaws and foibles. That said, I didn't love this quite as much as her previous outing, Race the Sands, though it's still a marvelous fantasy read. Part of this story is so steeped in a past we do not fully see for these characters. I wish I had more of that past. That past is what allows for the snappy dialog between Kreya and Zera. I enjoyed their renewed friendship.I'll report back about the audiobook of the novel when it is released.I received a digital and paper review copy of this book in exchange for an honest review.