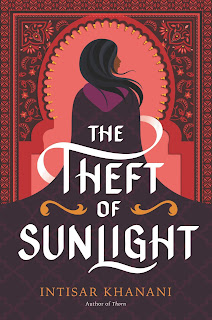 The Theft of Sunlight by Intisar Khanani
My rating: 5 of 5 stars

For longtime followers of Intisar Khanani's writing and social media, we've often heard about a novel with the protagonist of The Bone Thief, Rae. Here, at last, is her tale! Rae, or Amraeya, is a very smart young woman who is living life with a painful disability. She was born with a clubfoot and, though gently treated by family and loving friends, has long been bullied and scoffed about as a future spinster and has heard that shocking word to see on a page "cripple" used to describe her for far too long. Rae expects that her life will be settling down in a spinsterly life with her sister Niya, who has her own disability- the gift of illicit magic. Neither Rae or Niya expect they will ever marry, what with their challenges and secrets. In fact, Rae never expected she would leave her father's horse farm in Sheltershorn. When her cousin Melly, whose husband Filadon works for Prince Kestrin, soon to be husband to Princess Alyrra of Adania, asks for Rae to come to court, Rae is reluctant to do so. But, when her best friend Ani's sister Seri becomes one of the latest children to be snatched by persons unknown, Rae rethinks this. Perhaps traveling to Menaiya's capital city of Tarinon will allow her to see what is known about these child snatchers. Her sisters are also eager for her to do so they will hear stories of the royal family and court. Yet Rae finds that life in the palace is infinitely more complicated than she planned when Prince Kestrin asks for Rae to serve as an attendant to Princess Alyrra, advising her about Menaiyan customs and keeping an eye out for her in an as yet not very friendly court. After all, Alyrra was living as a goose girl thanks to Valka's treachery in the events described in the first Dauntless Path novel, Thorn. Rae is surprised to find that she really likes Alyrra, and that Alyrra also takes an interest in the child snatchers, having lived closer to the common folk during her time as a goose girl. What the aristocrats pass off boogey-man tales to scare children is very real to the working class of Menaiya who have few resources to track down and rescue their children. Rae's role in Alyrra's service is thus partly secret, as only a few people know of Kestrin and Alyrra's opposition to the trafficking of child laborers, and her work in this regard is quite dangerous. Because ending trafficking and this "free" labor force is bound to have staunch opposition. But the sources of opposition are obscured and come from surprising corners of the kingdom.

While Thorn was originally a retelling of the Grimm Bros. goose girl fairy tale, Theft of Sunlight, first in a duology, is an original work set in the world of Thorn. It is a far darker tale, dealing with the complicated process of ending trafficking and breaking criminal enterprises involved or on the borders of it. The novel is so beautifully written in terms of its rich detailing of life in Menaiya, from social customs (which feel rather South Asian and Arabic) to the realities of political life in King Melkior's court that it's easy to get lost in the story only to be brought up short by very harrowing events that befall Rae. Readers should be prepared for a far darker story, and should also be prepared for an unresolved ending. Because yes, there's a cliffhanger ending, dear Reader, which is part of why I chose to review the novel after the release date. For those of you out there who hate cliffhangers and refuse to read until the next book is out, I encourage you to realize that in the pandemic-affected book industry, you may be waiting for a book that will never be published if authors don't sell well now. They are working in an industry that has really suffered during the pandemic, when book tours have only been virtual, and book sales have been adversely impacted by high unemployment, poor library access, and closed bookstores, among the many challenges. The future of author contracts for forthcoming books depends on book sales now and many authors are fearful of not being able to continue. Take a chance on a good book, Reader. You will have the enjoyment of rereading just before the sequel is released. But please, let's have sequels.

I also listened to the audiobook of Theft of Sunlight which is beautifully narrated by Shiromi Arserio. She does a great job, especially in the last chapters of the novel which are just heartbreaking.

I received a digital and paper review copy of this book in exchange for an honest review.